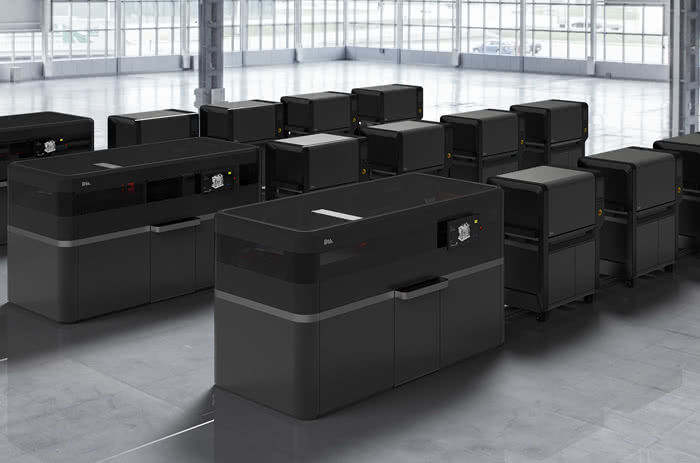 Desktop Metal’s 3D printing solutions are designed to change the way the world manufactures metal parts. The Studio System™ is the first office-friendly metal 3D printing solution, designed to be accessible for engineers. Using revolutionary single-pass technology, the Production System™ is designed for mass production, producing high-quality parts up to 100 times faster than existing systems, while reducing costs up to 20-fold.

We caught up with VP of Product, Larry Lyons, to talk about Desktop Metal’s vision and how a two-year old company has come so far, so quickly. “I wouldn’t say it was something we were expecting,” Larry admits when we ask whether Desktop Metal’s award from Popular Science was a surprise. The renowned US technology title recently named the Production System among the winners of the “2017 Best of What’s New” in the engineering category. “It’s always great to get that kind of recognition, but our focus remains on getting our products out of the door – starting with the Studio System – and into the hands of our very excited customers.”

Desktop Metal is working on two separate but allied printing systems aimed at manufacturers and engineers: The Studio System is designed as an end-to-end solution for printing complex metal parts in-house – ideal for rapid prototyping. The Production System focuses on speed, quality and cost-per-part as the only metal 3D printing solution for mass production of high resolution parts. Desktop Metal is accepting reservations for both systems. The Studio System began shipping to Pioneer Partners last year, and availability of the Production System is expected in Q1 2019. Larry believes that these technologies represent a major shift in the way companies will manufacture metal parts and go to market across several major industries.

“When you look at the market today, most of the ‘next step’ products from Direct Metal Laser Sintering (DMLS) companies just have more lasers and bigger build volumes. When you compare that to what’s possible with the Production System, you’ll see a whole functional change. We are breaking metal 3D printing out of the high-end medical and aerospace niche that it’s been in since its inception.”

Metal 3D printing for all

While Larry recognizes that there are some “great success stories” in those industries, Desktop Metal wants to be more than just a me-too player. It is focused on making metal 3D printing accessible to companies that are currently priced out of the market, or in applications where production volume doesn’t make DMLS a viable option.

“Even in the automotive world, companies that have been using DMLS for years for their race teams could never use it in their mass market vehicle production process. The costs have never made sense for them to do that. We see the Production System as a way to allow automotive manufacturers and other industries dealing with a lot of metal parts to realise costs that aren’t possible with DMLS.” It sounded to us like the benefits were clear enough for Desktop Metal’s Studio and Production Systems to sell themselves. Larry appreciates the suggestion, saying: “It’s great that our messaging is resonating across several industries, and there is a lot of interest in both of our systems, but there is a lot to do before we see the type of major transformation we think is possible.

“Very large companies can’t change everything overnight. The first step is getting their hands on the system and understanding what it can do. After that, Desktop Metal has a responsibility to help customers realize the full potential of this technology, such as design optimization tools like our Live Parts™ technology preview which makes it easy for users to quickly generate part designs that are suited for 3D printing. There is a lot to do, but we’re in this for the long-haul.”

In mentioning the long-haul, Larry pointed out that Desktop Metal was founded in 2015. It’s a young company that has come a long way in a very short time. What would he say to customers worried that it doesn’t have enough experience in the field?

“The 3D printing industry has seen a lot of companies making some big claims that haven’t panned out,” he admits. “A lot of our customers have been burned before, and some of them don’t want to jump in to another new technology right away, but when you look at the team that we’ve assembled here, leaders in advanced manufacturing, metallurgy, and robotics, they’re 3D printing veterans. “Some of them have literally invented 3D printing technologies. We’re very well positioned to execute on the products that we’ve announced and we’re exposing customers to them while they’re still being developed. We’re aligning their expectations with our own and defining a very clear line forward that we’re going to take together. We’ll not just be showing up and dropping off the system at their door and saying, ‘good luck’.”

Desktop Metal has partnered with a range of alloy manufacturers, both to save itself the pain of setting up direct supply chains and to allow customers to remain with the suppliers they already know.

“Some of our early customers, like Caterpillar and BMW, have been buying steel for 50 years, so for us to walk in and tell them they need to start buying from us wouldn’t be met with a lot of excitement. We took the view that we needed to work with powders that are already on the market,” Larry says.

“Metal powders are widely available from multiple sources and they’ve already come down the cost-curve. We do need to qualify them to make sure they’re compatible, but once we’ve done that, we want to remove ourselves from the equation. The customer can talk with their preferred supplier rather than having us in the middle adding our own cut to the cost.”

Paul Tickle is the Metals Product Specialist at Laser Lines, a UK reseller for Desktop Metal machines with many years of experience selling and supporting additive manufacturing machines. He says: “I have seen several companies with lots of experience in printing announce a move into the additive manufacturing sector, but they have taken a long time to bring a system to the market. Desktop Metal has formed, developed two platforms and started shipping systems to customers in two years. “Desktop Metal looks set to change the market for good. The Studio System gives engineers the ability to build functional metal parts in hours across a wide range of materials. The underlying technology is disruptive: metal parts can be produced using a process similar to the way plastic parts have been printed for 30 years. Having the added benefits of separable supports and a fully controllable sintering process, the system is a fully controlled end-to-end printing solution.

“With the Production System, customers will benefit from high speed low cost printing. For the first time, additive manufacturing will be as cost effecting as traditional manufacturing methods. We believe Desktop Metal has found the winning formula for success in the metals space.”

To find out more about Desktop Metal’s offering, or to discuss and order its revolutionary Studio System, call Laser Lines today on 01295 672599 or email 3dworld@laserlines.co.uk

« How do I quantify my Return On Investment in a 3D scanner?
Meet Ben Rowberry, Applications Technician, 3D Printing Bureau »
×
×
×