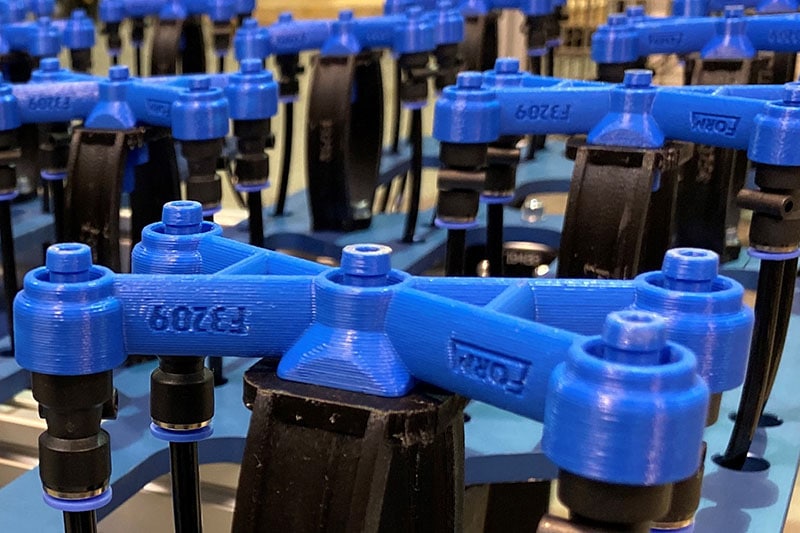 When Poole-based robotics company Form Automation was looking for a new method of production, it was a student that inspired the move to 3D printing.

Martin Grisdale, Director explains: “We had a student working here who was doing an apprenticeship at Poole College. He was fired up about 3D printing and one of the machines the college had, and I wondered if it would fit our needs.”

Form Automation was established in 2001 and specialises in robotics. Its main offering is a pick and place machine, which makes up part of a typical food packaging production line. The machine adds a layer of material at the bottom of food packaging trays. Its machines are used worldwide and need to run 24/7.

Martin says: “We work with ABB Robotics to create a product that fits onto the end of a robot arm that slides into the production line and adds the insert to the tray. This might be to insert bubble wrap or paper depending on the food stuff that will eventually be in the food tray.

“Our robot arms need to be built extremely well and have a rigid but flexible construction, which runs efficiently and continuously to not hold up the production line. We have to be absolutely certain that no parts will come free – particularly as the machines are being used in food packaging.”

Prior to 3D printing, Form Automation had created an arm that used a number of intricate, aluminium poles, but Martin, who is responsible for product design, had been looking for a new, lighter solution.

With the Stratasys F370 from Laser Lines, he found what he needed. The end-of-arm robot tools are complex, and previously if any part of the stem on the end bent or snapped, the whole tool was out of action. Martin explains: “Replacing an aluminium part would have incurred significant delays to the production line and the entire line would have to come to a stop.”

Now, Form Automation prints the end parts on a Stratasys F370 3D printer and uses the flexible TPU elastomer for one part and the ABS for another, resulting in an end part that is extremely strong but has a tough flexibility, so is less likely to snap or break off.

Form Automation has also changed the design so that it is near impossible for an end cap to snap off in the process. A 90 per cent part reduction means that, instead of taking 50 minutes to repair the robot’s end-of-arm tool, Form Automation can now do it in just two minutes. The impact this has on production line downtime is invaluable.

Martin also explains that printing the parts has made them lighter. He says: “I wanted the tooled arm to look high quality, but also be a functional part. With the lighter weight on the end of the robot, it means the robot can go faster. We also print the parts with the company logo and a part number on, so if there are any issues or a part needs replacing, it’s easy for our customers to re-order.”

Not that this has happened. Since using the Stratasys F370 and 3D printing the parts, there has been a reduction in the frequency of damage to the end of arm tools.

Martin continues: “I wasn’t sure 3D printing was going to do it for us, but with Laser Lines as a supply partner, it has been fantastic. Before we decided on what machine was a possibility, Laser Lines 3D printed the parts in its bureau so we could see the finished result as sample parts and check they were going to work.

“We were nervous that the F370 was more of a development machine rather than a full production unit, as that was what our requirements were. Laser Lines helped us test this theory and ensure that we were buying a 3D printer that was going to work for us 24/7. The team in Banbury was also helpful with advice on the materials and how we could redesign the product.

“Having the bureau facility up the road as back-up should we ever need it is great – especially as I feel the Laser Lines team really understands our business and the critical nature of getting a part out quickly. Also, Laser Lines always has materials in stock. We can email in orders and questions and the team in Banbury is always helpful, responsive and come back to us ASAP – something we really value.”

« Full colour 3D printing, now available for your office
3D Printing – A beginner’s guide to the most commonly used materials »
×
×
×