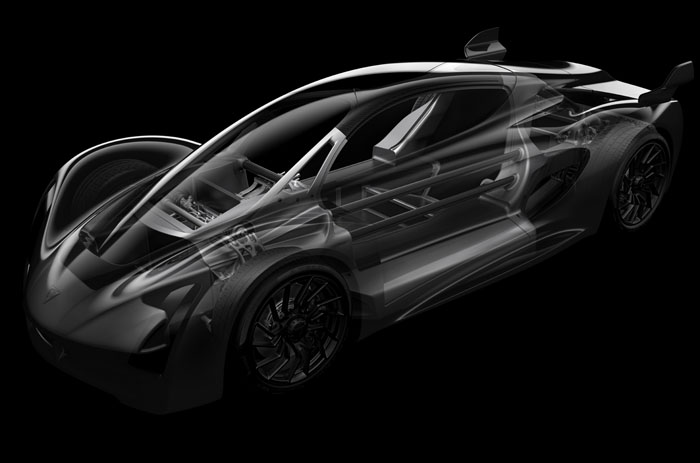 How printed parts are cutting the carbon cost of car manufacturing

We might be on the cusp of something… small. Divergent 3D, which ‘prints’ sustainable eco-friendly vehicles, has partnered with SLM Solutions, so that together they can grow its ‘Node platform’ and see more cars built where they’re sold, rather than shipped from factories far from their customer base.

“Divergent has been looking beyond the production line,” says Laser Lines’ SLM Product Specialist, Paul Tickle. “It’s one of the few manufacturers addressing one of the most polluting parts of the whole process: not driving the car but building it.”

It plans to produce 10,000 cars a year by printing, rather than forging, the nodes that connect the various parts of a vehicle’s carbon fibre frame. These can then be shipped to wherever they’re needed for local assembly, entirely bypassing the production line.

Local production for local use

“One of the major benefits of additive manufacturing is that you don’t need to produce a part in the Far East, America or somewhere in Europe if you want to use it in the UK,” Tickle explains. “There are potential benefits to garages and service centres, too. If a customer calls for a part, they won’t need to hold the stock: they can just print it locally making it available for fitting two or three days later.”

We may one day get to the point where end users can specify their cars for bespoke production using a process like this but, as Tickle says, that’s still some way off. More likely, its use will be confined to leading-edge manufacturers like Divergent and smaller-scale producers like Atom, Noble or Morgan, while larger names use the technology in a proof of concept and development capacity.

“We’ll only get to the point where mass produced cars are available on this platform when build volumes get significantly larger and build times are reduced,” Tickle says. “In the meantime, we’re going to start seeing the larger players facing competition from some unexpected quarters.”

Reducing the cost of entry

The smallest SLM Solutions machines costing less than £300,000 and the largest for just over £1m, which Tickle acknowledges are large investments. For a smaller company turning out a few hundred or thousand vehicles a year, though, they can make sense, they can retain IP and fully control the process, most significant of all they’re cheaper than setting up a complete production line.

“This will certainly disrupt the current car-building processes, but it will run alongside the traditional factory rather than replacing it wholesale, at least for a few years yet,” he says.

“You can’t just take a part off a machine and put it straight onto a car: there’s still a requirement for milling, turning, grinding and polishing, and with cars coming off production lines every 20 seconds or so. We can’t change the lines and workers with 3D printers, you’d probably need to build a larger factory.”

Yet this is a rapidly maturing market, and Divergent 3D and SLM Solutions aren’t the only players. Gas turbine blades are being produced this way, and GE is printing fuel nozzles for its Leap engines; Airbus has put 3D printed antenna bracketry into orbit and Space X is using additive production processes to produce components for its rockets.

“Smaller-scale on-site production is going mainstream as manufacturers address not only the carbon cost of using what they produce, but the ecological impact of building them in the first place,” Tickle says. “That can only be good news – for the planet as well as their customers.”

To learn more about how additive manufacturing in metal and thermoplastics can reduce the carbon footprint of all kinds of manufacturing processes, call Laser Lines today on 01295 672599, email 3dworld@laserlines.co.uk or click the button below.

« Laser Lines and Robinson Packaging first in Europe with Stratasys F123 Series model
From rubber-like to carbon fibre, our material range is growing »
×
×
×