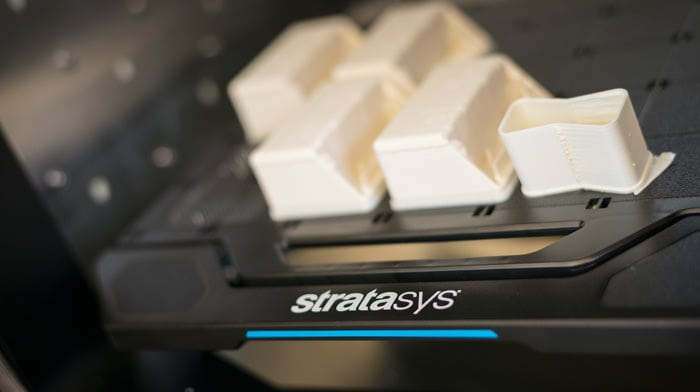 Robinson Packaging, a UK-based provider of custom moulded plastic and rigid paperboard packaging has chosen Laser Lines to install a Stratasys F270 – the first in Europe.

The F270 is part of the Stratasys F123 Series, a new generation of office-friendly 3D printers launched in February 2017. It will be used by Robinson Packaging in its work with global brands including GU Puds and Gillette.

Graham Nolan, Senior Product Designer at Robinson Packaging, said: “We chose the F270 because it’s twice as fast as its predecessor so it will allow even more efficient turnaround of design prototypes and test parts as well as a wider range of material options. As an early adopter of new technologies, this latest purchase is part of our continued programme of investment.” Mark Tyrtania, Sales Director at Laser Lines, added: “The Stratasys F270 is easy to install and simple to use, delivering Stratasys’ promise of plug-and-play printing. With wired and wireless networking, a touch screen display and intuitive bundled software, the F270 calibrates automatically, so Robinson Packaging will be more productive from the moment they take delivery.

“Laser Lines has been involved with the development of this product since the beginning, when Stratasys asked what we and our customers wanted to see in its next generation of products. The F123 Series is the perfect fit and it’s great that Robinson Packaging, one of our UK customers, will be the first to reap some of the benefits of this product development.” The F270 will prove to be an invaluable addition to Robinson Packaging’s suite of 3D printers, where a combination of models lets the team quickly mock up prototypes for customer approval and development. Typical items printed are pots, lids, bowls, cutlery and product jigs to name but a few.

Nolan concludes: “Being able to print such accurate models has allowed us to complete product demonstrations faster and with more accuracy than we would ever have been able to do without our 3D printers. Keeping our suite at the leading edge is so important to us – it means we can deliver better products to our customers with ever shorter lead times.”

Moderately priced and affordable to run, the F123 series offers a range of materials including ABS-M30 and ASA (plus PC-ABS in the F370).  QSR support material is available for the F170, F270 and F370 models while the F120 uses SR-30. The printers can also use inexpensive PLA, and each has a draft mode that further reduces the cost of producing test models.

Tyrtania adds: “The series is a perfect upgrade for existing users of the Dimension Elite and Dimension 1200es and there are generous trade-in deals to further reduce the initial cost.”

To find out more about how the Stratasys F123 series can help your business, give us a call on 01295 672599, email 3dworld@laserlines.co.uk or click the button below.