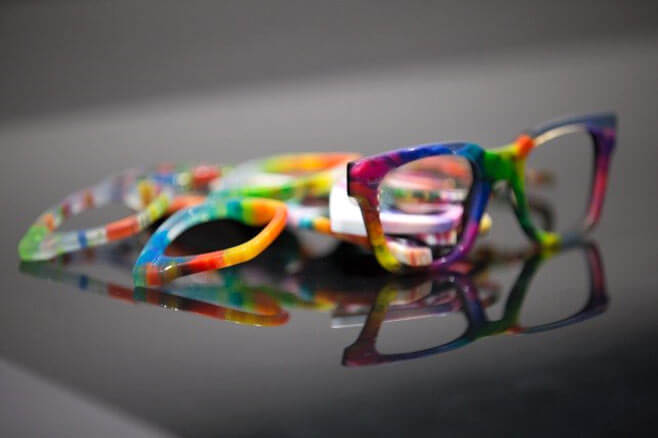 The secret of great design? 3D prototyping on a budget

When you’re producing glasses for Jimmy Choo and Hugo Boss, quality is paramount. Founded in 1878, Italian manufacturer Safilo is the brains behind the frames of the world’s most fashionable eyewear.

Shipping 25 top-line brands to 90,000 stores in 130 countries, it found itself hitting the limits of traditional prototyping tools. Using computer-controlled lathes to produce each iteration meant it needed to factor in 18 hours of machining for every adjustment. So, even with the process running overnight, they could only trial one change each day. The answer was simple. Safilo invested in a Stratasys J750 and immediately reclaimed more than two thirds of its production time. Now it could iterate each design in just three hours, plus a further hour for finishing, and produce several accurate, representative prototypes every day.

The J750 produces ultra-smooth objects from a layer resolution up to 14 microns in 360,000 colours. “It is a giant step forward for 3D printing,” says Laser Lines’ business development manager Richard Hoy. “Before the J750, colour options for 3D printed parts was limited. Now you can print a full-colour 3D model, and save as much as 80% of the time it would take to do the same using traditional methods.”

By integrating the printing and colouring process into a single operation, the J750 has removed one complete step from the production cycle: painting.

“This has slashed our developmental turnaround time… allowing us to accelerate our time-to-market and maintain our competitive edge with the launch of the latest fashion eyewear,” says Safilo product sample coordinator, Daniel Tomasin.

Taking production to the next level

The J750 is the most advanced colour 3D printer ever produced, able to take six materials at a time for an unrivalled choice of colours and finish. These go far beyond traditional opaque material options, too, with transparency and even flexibility within the designer’s control. “The ability to have our 3D printed concept prototypes mimic the same colour and texture as the finished product has significantly accelerated the development of new eyeglass frames,” Tomalin says, while Safilo creative director, Daniel Iarossi, champions the J750’s “endless gamut of striking colours”. With these, he says, the company “can produce completely different frames and secure levels of product personalization that were previously unattainable.”

He hails the J750’s arrival as “the start of a new age for designers” – and that’s no exaggeration. Talk to us today about how investing in a J750 can save you money and time in the long run.

Even if you have a smaller budget, there is no need to miss out on this new age. You can revolutionise your iterative production process by outsourcing the work to Laser Lines.

Laser Lines’ on-site bureau was the first to offer contracted-out production on the J750 to UK clients, giving them the opportunity to benefit from the same time savings, without buying a printer of their own.

Working with a remote print service like Laser Lines’ bureau is no more difficult than printing locally. As Richard Hoy explains, “all we need to get started is an STL file – standard format for any 3D printer – which we can accept by email or a cloud sharing service. That’s enough to build a single part on any of our printers, but it won’t push the J750 to its limits, so there’s plenty of headroom for clients who want to take things further.

“When you want to print a more complex, full-colour object, the J750 also accepts STL shell based assembly models or VRML files which are, in effect, a solid object mesh and an image overlay. These are combined in the printer to produce an extremely realistic model.”

To find out how we can help you achieve similar savings to Safilo, call us on 01295 672599, email 3dworld@laserlines.co.uk or click the button below.