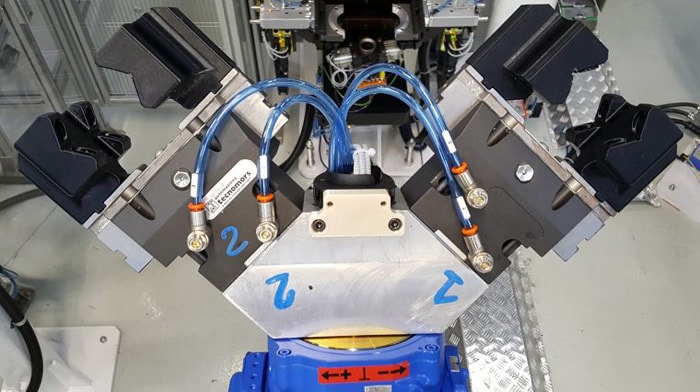 Few industries have embraced 3D printing as wholeheartedly as car manufacturing. GKN Driveline, which designs and builds vehicle powertrains – engines, transmission, drive shafts and differentials – for more than nine in ten of the world’s auto makers, is replacing traditional production techniques with an investment in Stratasys 3D printers.

As well as cutting lead times by up to 70%, the move from buying in traditional plastic and metal tools to producing its own is also reducing its dependency on third-parties – and spares supplied by the manufacturers of the machines it relies on.

“What GKN is doing may soon become the norm,” says Laser Lines’ Richard Hoy. “With printers getting faster and more affordable, and material becoming more versatile, the wait for replacement parts will become less and less of a feature of large-scale production processes.”

As a Stratasys Platinum Partner, Laser Lines is one of the UK’s longest-standing resellers of 3D printing technology. It offers first class support for printers, and a wide range of materials like the ones used in GKN’s factory.

High performance materials, like Ultem 9085 and the carbon fibre-infused Nylon 12CF, not only exhibit many of the characteristics common to traditional metals, but improve on them, being lighter and easier to work with. The ability to produce parts without first creating moulds, which have a finite life and require the involvement of several traditional crafts, allows several parts to be produced in sequence, without the source degrading over time.

“Ultem 9085 is a good all-round material for a range of applications, but particularly where certification for flame resistance and toxicity are required,” says Hoy. “We use quite a lot of it, predominantly for our aerospace customers, but we also get enquiries from clients who are attracted by its strength. Currently they need to factor in manual support removal, but this shouldn’t pose a problem if the supports are easily accessible.”

GKN’s client list is a roll-call of the biggest names on the road, running the gamut from Fiat to Ferrari. Each relies on the British multi-national to keep its production line optimised so they can benefit from the just-in-time production that keeps their operations competitive. Any delay on GKN’s part could have serious knock-on consequences, but that’s no longer a worry, since it invested in a Stratasys Fortus 450mc Production 3D printer.

When a cable bracket went missing from one of its robots, it produced a new one on site and saved a week or more that would have been lost if it had needed to wait for the robot’s manufacturer to source and dispatch a replacement.

“This ability to manufacture on-demand is crucial to ensuring our production line is always operational and maintains business continuity,” says GKN lead process engineer Carlo Cavallini, who claims that the factory’s ability to print its own tools not only makes it more flexible, but shortens its supply chain, too. “In the future, I believe that FDM 3D printing will become an integral part of our entire tool development cycle and help us further improve business performance.”

GKN isn’t only using the Fortus 450mc to produce spare parts, either. A recent job to design and print a greasing nozzle enabled it entirely eliminate oil spillages on-site, while simultaneously improving the distribution of grease on components that it needed to keep moving.

Cavallini described the improved nozzle as being “crucial to streamlining the production cycle … enabling us to provide customers with premium quality final parts.”

Previously, companies like GKN Driveline would have commissioned a part like this out of house, likely involving third-party designers and significant delays as it was shipped from a remote site.

To learn more about the ways in which 3D printing can keep your production line running, call Laser Lines on 01295 672599 or email 3dworld@laserlines.co.uk