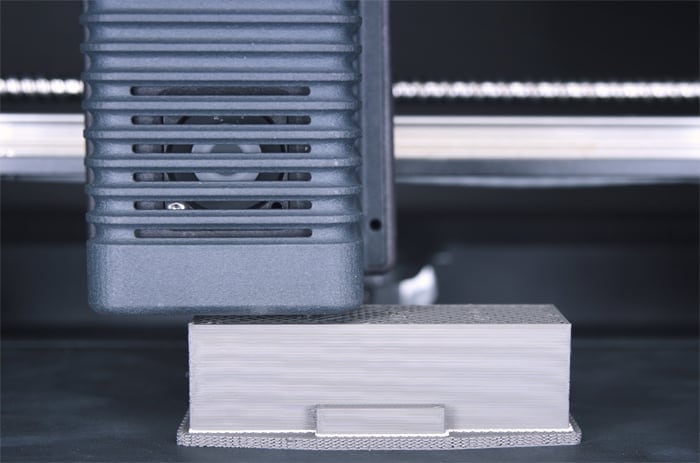 Built-Rite Tool & Die is a mould-making and design business based in Massachusetts, USA. Since 1984, it has been a leader in the manufacture of moulds for plastic injection moulding.

Recently, the company has faced twin problems. Its overseas competitors can produce moulds more cheaply, and local firms can iterate faster. It was looking for a solution to help it regain its edge in this cut-throat market.

The mould that is used is crucial to the success of the process. It has to stand up to a lot of abuse, and it can be a complex structure with lots of cavities, inserts and cooling channels. Moulds tend to be expensive to make, with long lead times. If the design of the part changes, the mould needs to be changed, which adds more time and cost.

Built-Rite decided to test out the Desktop Metal Studio System with an existing mould cavity insert to see if it could give it a competitive advantage. The three-part Studio System heats metal rods and extrudes them on to a build plate layer-by-layer. The result is placed in a debinding unit, then into a furnace.

The results were incredible. Compared to using a third-party prototyping service, the Studio System delivered a 90% reduction in cost, a 30% saving in time and 41% reduction in weight.

Ron Caron, General Manager at Built-Rite, was certainly impressed: “An injection mould is a very complex assembly and must be built to withstand very high pressures. We immediately recognised advantages of using printed metal parts in our moulds, including the ability to produce mould inserts quickly. The ability to design cooling channels in a way that we could not before – conforming to the cavity geometry, and also light-weighting parts to help reduce operator fatigue were added bonuses.

“What used to take two weeks with outside vendors now takes a couple of days. We can increase build capacity and diversify, and we can capture more business, especially in prototyping. We just couldn’t compete on turnaround time before – now, it’s a completely different story.”

Here are how the two methods of manufacture stack up:

Laser Lines has been selling and supporting 3D printing machines for over 20 years. To find out how the Desktop Metal Studio System can save your business time and money, give us a call on 01295 672599 or email 3dworld@laserlines.co.uk

FIND THIS CASE STUDY INTERESTING? WHY NOT TALK TO OUR 3D PRINTING EXPERTS TO DISCUSS IN MORE DETAIL